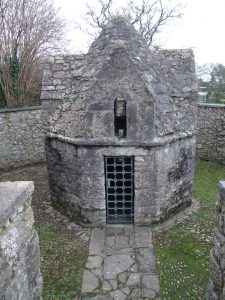 Beside the ancient Church of Saint Doolagh’s believed to have been erected in the 12th century and possessing many characteristics of early Saxon churches but outside the enclosing wall, is a holy well contained within a circular stone basin, over which rises an octagonal building od graceful style and proportions.

About the middle of the 17th century, Patrick Fagan, of felt rim, decorated this building, and had the walls inside covered with paintings – that on the ceiling representing the decent of the Holy Ghost upon the Apostle, while at the sides were shown Saint Patrick, Saint Bridget, and Saint Columkille, with the patron saint (Duilech) in a hermit’s garb.

On the wall was a marble slab bearing the following inscription, commemorative of the curative effects of the water of the well:-

“Bethsaida’s sacred pool let others tell,
“With healing virtues how her waters swell;
“An equal glory shall Fingalia claim,
“Nor be less grateful for her blessed stream.
“Thy prayers Dolachus mounted up to heaven,
“Thence to the well the mighty power is given
“To drive the fiery fever far away,
“Strength to replace and rescue from decay,
“In every malady to life a stay,
“The cherub, wondrous moves his waters there,
“The saint behold! who stirs the fountain here.
“Hail lovely fount, if long unsung thy name,
“It hence shall rise above the starry frame.”

According to Lynch’s Life of Saint Patrick, these interesting memorials of devotion were destroyed by Sir Richard Bulkeley, presumably in a fit of iconoclastic zeal, when returning to Dublin with a party of troopers after the Battle of the Boyne.

Sir Richard, who was a hunchback, and somewhat weak minded, subsequently fell under the influence of a set of religious imposters, who, besides pretending to the gift of prophecy, undertook to change him to his proper shape and proportions. So deluded was he by their wiles that he had decided to sell his estates and divide the proceeds among them, but his death, which occurred in 1710, prevented him from carrying out his foolish wish.