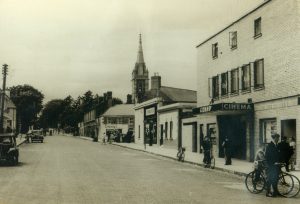 Malahide was a decayed watering place in 1906 which attained an ephemeral popularity about sixty years previously consequent upon the construction of the Dublin and Drogheda Railway, and although there are many good houses and terraces in the vicinity, it has, in recent years, shown little signs of revival except as a golfing resort.

Two hundred years ago it was a favourite drive for the Dublin Folk, and the eccentric John Dunton in The Dublin Scuffle (1699), says – “Sometimes I would for my diversion ride out a few miles either to Santry, Swords or Malahide, a place as eminent as Billinsgate for people going to eat oysters there.”

A Picture of Malahide castle appears on the maps of the Down Survey, and in the notes is the following description of he town:- “Malahide contains the town of Malahide; there is a good stone house therein, with orchards and gardens and many ash trees, with other out-houses in good repair; there are also many thatcher houses and cabins by the seaside or bay, where fishermen dwellers, and a mill that goeth by ebb tides”