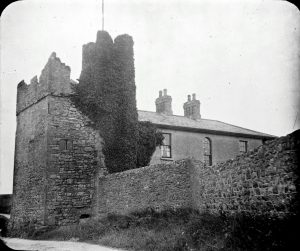 Robswall castle, a square edifice standing on a rock beside the shore, with a dwelling house built up against it.  It consists of three stories, and was strongly fortified, having been designed to command the passage of the estuary of Malahide.

The ceiling of the ground story is vaulted, and a circular staircase leads thence to the first floor, which has been entirely modernised, while off to the main room is a small “garderobe.”  A flight of stone steps ascends to the battlements, from which a little watch tower similar to those on Dalkey and Bullock Castles, is reached.

The name appears in an Inquisition in the reign of Henry VIII as Roebuck’s Wall, and is given in its present form in the notes of the Down Survey, where it is described as a thatched castle belonging to the Barnwalls of Turvey.

According to tradition this castle was founded in the 15th century by one of the de Berminghams with the object stated above, but it does not appear to have ever sustained attack or siege.